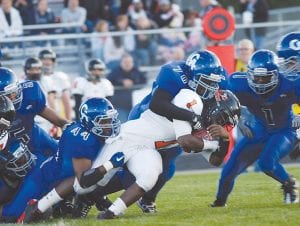 FLINT TWP.
— The game was just minutes old when Carman- Ainsworth football coach Nate Williams called a timeout and brought his offense to the sideline for a quick chat.

A fiery chat at that.

The Cavaliers coach had seen too much sloppiness in the early going against Flushing last Friday and “instructed” his players to clean up their execution.

The Cavs got better as the game progressed, but still dropped a 41-13 decision to the Raiders in a Big Nine Conference opener at Carman- Ainsworth Junior High.

The script was much the same as the previous week’s loss to Warren De La Salle: The Cavs fell into a big hole early, battled back but couldn’t pull out the win.

The Cavs looked better against Flushing and got back into the game in the second half, cutting a 21-0 halftime deficit to 21-13 early in the fourth quarter. But the Raiders scored the last three touchdowns to leave Carman-Ainsworth at 0-3 on the season.

Flushing jumped ahead, 7-0, on its first play from scrimmage, as Brandon Price-Crum bolted 57 yards up the middle just two minutes into the game. Quarterback Sal Ausiello made it 14-0 with a 24-yard touchdown run with 57 seconds left in the first quarter, and Price-Crum scored again on a 17-yard dash late in the second for a 21-0 halftime lead.

The Cavs started their comeback on Nick Hill’s 26-yard touchdown pass to Shane Barron and Connor Storm’s extra-point kick with 6:29 left in the third quarter. The Carman-Ainsworth defense also shut out the Raiders that period.

But Ausiello answered three minutes later with a 12-yard scoring pass to Tyler Walters, then hit Matt Webster with a 52-yard touchdown bomb at the 2:53 mark to make it 34-13. Blake Hilsabeck tacked on a 56-yard TD run with 18 seconds left.

The Cavs were outgained 479-295 in total yardage and hurt themselves with three interceptions and 16 penalties for 125 yards.

Barron led Carman’s 155-yard ground game with 109 yards on 13 rushes and caught six passes for 65 yards. But he also threw one of the interceptions. Nick Hill threw the other two picks but otherwise passed well with 10-of-19 accuracy for 140 yards.

Gerald Holmes added 33 yards on six carries and caught a pass for 14 yards. Justin Swims had a 30-yard catch and Chris McKay caught one for 20 yards. Calvin Green had the other reception for 11 yards.

Chris Thompson led the defense with a sack and two tackles for loss.