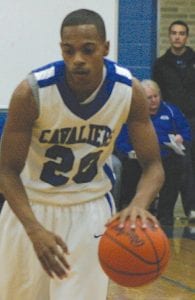 The Cavaliers trailed, 14-4, after the first eight minutes and were still behind, 25-19, at halftime. They caught the Chargers at 39-39 in the third period and pulled out the victory with a 15-8 final quarter.