Cavaliers ready for run at state 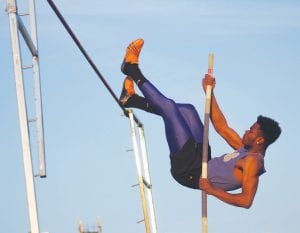 Carman-Ainsworth’s Devonte Johnson was fifth in the state pole vault last year and has cleared 14 feet this spring.

That difference in attitude is a big reason the Cavaliers usually finish in the upper half of the team standings in the Div. 1 finals and why they won the state championship in 2008. The longtime Hall of Fame coach puts his athletes in the right frame of mind to go for the gold on the biggest stage of the high school track season.

It’s also why he tries to put them in the best position to achieve those lofty goals. Domerese and girls’ coach Dave Thrash don’t go after the team championship at the regional, but rather maneuver their athletes into the right events to maximize their potential at state.

The Carman-Ainsworth coaches have a lot of talent to work with going into Friday’s regional meet at Davison.

Tyler Minor has anchored the Cavs’ 400, 800 and 1600 relay teams to some of the fastest times in the region this year. Logan Bannister, Caleb Ruffin and Kyle Mason are also part of those relays in one event or another, and Bannister is a threat in the 200 as well.

Cahlil Brownlee and Terrell White are ranked high in the 110 and 300 hurdles.

Tyler Pangerl clocked 4:26 in the 1600 last week, one of the top four mile times in school history, and also will be a strong contender in the 800.

Devonte Johnson is a returning All-Stater in the pole vault and has cleared 14 feet this spring. Minor and Brownlee are both near 22 feet in the long jump.

On the girls’ team, Harmany Williams was a state qualifier in the 100 hurdles last year, and Thrash is looking for her to repeat.

Williams also is on a 400 relay team with Aleah Mixon, Dejene McNair and Italia Daniels that has the second-fastest time in the region on athletic.net. Mixon and Daniels also have an outside chance at getting to state in the 100.

The Lady Cavs’ 1600 relay team of Chelsey Carpenter, Cherry Smoots-Hoyle, Kendall Brantley and Mixon also has a shot at state.

“If they run what they’re capable of, we could be close,” said Thrash.

The state meet is May 30 at Rockford.