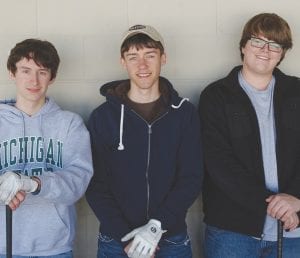 Tony Mattar (center) is the Cavs’ top player and should get help from JV standouts Jacob Linder (left) and Kameron Rutlewski.

FLINT TWP. — The No. 1 golfer at Carman-Ainsworth this spring is obvious. It’s the rest of the starting lineup that’s up for grabs.

Tony Mattar is the only returning player from the varsity lineup last year and is clearly the Cavs’ top player with average 18-hole scores in the mid-80s. The senior shot 84 in last year’s Div. 1 district at Bay County Golf Course, missing a berth in the regionals by two strokes. He earned Honorable Mention on the All-Big Nine team.

Carman graduated its other top players in Travis Baes and twins Matt and Brandon Pike. Now it’s coach Bob Blaylock’s job to build a new starting lineup from the 17 players who signed up.

“Mostly the kids from the JV are going to be the ones I’m counting on,” said Blaylock. “Hopefully, some of these kids step up. A few played junior golf, but nowhere near as much as I would have liked to see.”

With the lingering winter restricting practice to the driving range, Blaylock has nothing to go on but last year’s scoring averages. So far, juniors Kameron Rutlewski and Jacob Linder and sophomore Ricky Frazer top that list from the JV team. Sophomore Jack Baker also played last year, and senior Joe Hernandez should get around the course okay.

“The rest are kind of inexperienced, and we’ll see what happens,” said Blaylock. “They’re going to earn their spots. Some kids that haven’t played competitively, if they show potential, they may work their way up.”

Regardless of their skill level, Blaylock won’t cut anybody who really wants to play.

“I’ll let them stay on the team to learn to play the game,” he said. “I don’t want to cut them if they’re willing to come to practice.”