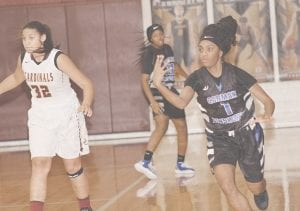 Carman-Ainsworth’s Jessiana Aaron shows her teammates the play call from the floor against Davison on Dec. 11. Photo by Lisa Paine

Saturday was a competitive matchup against Southfield A&T with the Cavaliers on the losing end, 68-55.

“Saturday was a great competitive game against a very high quality opponent,” said Carman-Ainsworth coach Lance Belil. “We were up three at halftime and down three at the end of the third. Southfield handled our pressure very well in the fourth and made their free throws down the stretch, which is what good teams are supposed to do. Hopefully, we learn from these big games against good teams to get us ready for the tournament.”

Last Friday, Carman-Ainsworth got off to a slow start, but Grand Blanc lost its composure in the second half after the Cavaliers tied the game at 14-14 at the half. Carman-Ainsworth ultimately won the game 36-27.

Grand Blanc was ahead by six, 11-6 after the first quarter, but was limited to just three points to Carman-Ainsworth’s eight in the second to even the score at 14-14. The Cavs then outscored Grand Blanc 12-6 in the third and 10-7 in the fourth.

“We were tied at the half and held them to the 36 points, just too many turnovers,” said McKay. “We couldn’t afford to give them easy looks. We’re young, just need to take care of the basketball better. We played to win in the first half, but played not to lose in the second.”

McKay was proud of his girls’ efforts in trying to slow down Carman- Ainsworth’s Destiny Strother, who had 12 points on the night. Arie Lewis tossed in eight points for the Cavs, but the Lady Bobcats were able to limit Aaliyah McQueen to six points.

“Just more composure is needed on our end,” said McKay. “They made us pay, but I can’t complain about our effort tonight.”

Maya Williams led Grand Blanc with eight points that includes two from beyond the arc, Mansour had five and Madison McKay four. Arleah Jackson was missing from the lineup due to illness.