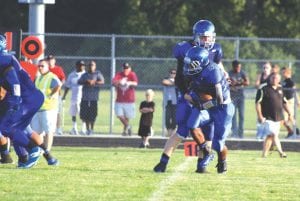 FLINT TWP. — Carman- Ainsworth wasn’t supposed to have a standout player on its football roster this year, just a bunch of good players on a good team.

Jevonte Alexander is starting to stand out.

Alexander returned the opening kickoff 90 yards for a touchdown and later added a 20-yard scoring run to spark the Cavaliers to a 40-6 rout of Dearborn Heights Robichaud last Friday in a non-league game at home. The senior had 226 all-purpose yards as Carman-Ainsworth improved to 3- 1.

In the mold of Gerald Holmes last year and Shane Barron before that, Alexander is making big plays every week to spark the team’s success. He’s had four touchdowns on defense in addition to his offensive exploits.

Alexander’s kick return gave Carman-Ainsworth a 6-0 lead, and the Cavs piled on four more touchdowns in the second quarter. Alexander ran 20 yards for the first score, Lorenzo Redmond ran one and 10 yards for the next two, and Alexander passed 47 yards to Brandon Walker for a 32-0 halftime command.

Demarion Allen scored a 24-yard run in the third quarter and Devonte Miller made it 40-0 with his two-point conversion run. Robichaud scored in the fourth quarter on a 34-yard pass.

Carman-Ainsworth will play the rest of its season in the Saginaw Valley League-South Division, starting with Friday’s game at Flushing.