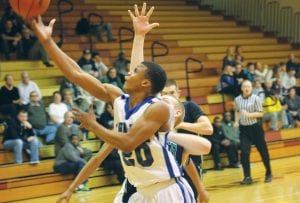 Carman-Ainsworth’s Jakavien Lewis takes a scoop to the hoop in Monday’s district game against Lapeer at Davison.

DAVISON – Carman-Ainsworth’s second-half surge on the basketball court continued Monday night as the Cavaliers won their opener in the Class A district tournament 65-53 over Lapeer.

Juwan Evans poured in 22 points, eight of them in an incredible 12-second span of the third quarter, and the Cavs, 8-12, advanced to Wednesday’s semifinals against Kearsley, 12-8. Davison, 14-6, met Swartz Creek, 2-18, in the other semifinal, and the district final will be played at 7 p.m. Friday.

A young, rebuilding Carman- Ainsworth team had started the season 2-8 but has since won six of 10 games, including the last four in a row.

“We’ve just been focusing on the little things, especially our defense,” said Cavs coach Jay Witham. “I think I’ve finally found groups that work well together. I’ve got kind of like an offensive group and a defensive group, but the defensive group’s the one that’s been putting in the grinding work and taking care of us.”

That defensive work was on display late in the third quarter, sparking a Carman-Ainsworth flurry that turned the momentum completely in the Cavs’ favor. Evans had just scored a basket with about 1:30 left in the period, and Carman-Ainsworth followed with three steals in rapid succession, two off Lapeer inbounds passes. Evans turned all three of them into quick layups, and the Cavs went from a 39-37 lead to 47-37 in barely 12 seconds.

Evans capped the period with a slam dunk off an alley-oop pass from Jarell Giles to give Carman-Ainsworth a 50-39 lead going into the fourth quarter. The Cavs stretched it to 55-39 early in the fourth and held off a late Lapeer rally – the Lightning got within 55-47 with 3:19 left — to nail down the win.

“It seems like every game we have a little lull where we let a team stay around instead of taking it from an 8-10-point lead up to 15-20,” said Witham. “If we want to keep moving on, we can’t do that.”

Jakavien Lewis added 12 points and Giles had 11. Jaylen Bradley had six points, including two layups in the last 2:50 that kept the Cavs in a 10-point lead.

The district champion will return to Davison at 7 p.m. Monday for a regional semifinal against the winner of the St. Johns district.