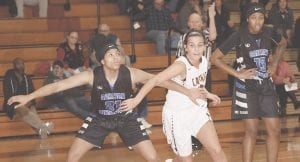 DAVISON — Carman-Ainsworth, a regional finalist last season, put on a shooting display against Davison Tuesday night, taking the Cardinals to task for a 54-39 win.

Carman-Ainsworth held a healthy first quarter lead of 16-4 and with just two minutes left in the first half carried that momentum to a 34-9 lead. Davison tried to right the ship in the third, outscoring Carman-Ainsworth 19-11 and edged out the Cavs 11-8 in the fourth, but the hole was simply too deep despite the valiant effort.

Destiny Strother led Carman-Ainsworth with 20 points, Jessiana Aaron had 14 and Aaliyah McQueen had 11.

On Saturday, Carman-Ainsworth lost a heartbreaker in overtime against Michigan Center, 61-56.

The Cavs led 17-13 after the first quarter and 33-25 at halftime. Michigan Center came out hot after the break and outscored Carman-Ainsworth to cut the deficit and knotted the score with a 9-6 fourth quarter. In overtime, Michigan Center outscored the Cavs 6-1.

McQueen led Carman-Ainsworth with 24 points and 17 rebounds and Destiny Strother had 18.

Carman-Ainsworth is at Grand Blanc Friday for a highly anticipated showdown with Grand Blanc, now a member of the Saginaw Valley League after getting voted out of the Kensington Lakes Activities Association.