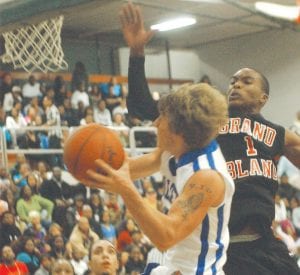 Nick Hill and the Cavaliers are flying high these days.

FLINT TWP. — It’s been a great month for the Carman-Ainsworth boys’ basketball team.

The Cavaliers have won seven straight games, capped mostly recently by a 74-55 victory over Swartz Creek in a non-league game at home Tuesday night.

Carman hasn’t lost since a 65-54 defeat to Flint Northern on Jan. 25. Among the victories in the streak are wins over the other two Flint city schools, Northwestern and Southwestern, and state-ranked teams Flint Powers Catholic and Saginaw Buena Vista. The run has elevated the Cavs to the higher honorable mention ranks in this week’s Associated Press Class A poll.

The Cavs had little problem with Swartz Creek, jumping out to an 18-12 first-quarter lead and stretching it to 42-31 with a 24-19 second period. Creek edged back to within 53-43 with a 12-11 third period, but Carman nailed down the victory with a dominant, 21-12 showing in the fourth quarter.

Carman-Ainsworth can wrap up a share of the Big Nine Conference championship with a win at Davison this Friday. The Cavaliers beat the Cardinals on Jan. 28, fighting off a late Davison rally. That victory started the seven-game winning streak.

The Cavs will finish their regularseason schedule next Thursday with a non-league game at Brandon. They will then play in the Class A district tournament at Saginaw Arthur Hill.