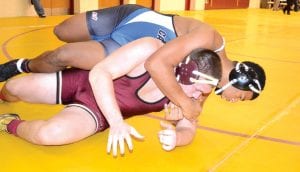 The Cavaliers totaled 217 points to fall just short of Brighton, which won the title with 238 points. Host Woods-Tower was third with 171 points.

Three Carman-Ainsworth wrestlers went 5-0 for the day. Demetric Hall was undefeated at 103 pounds, Milik Dawkins was unbeaten at 145 and Jerron Thomas went 5-0 at 215.

The Cavaliers were supposed to wrestle Flushing and Davison in a pair of Saginaw Valley League dual meets Jan. 8 at Davison, but those meets were canceled by inclement weather. Carman-Ainsworth will wreste in the Williamston Invitational this Saturday.