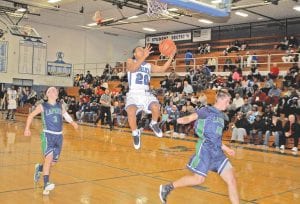 FLINT – The first game the Carman-Ainsworth varsity boys’ basketball team played at Saginaw Valley League-South rival Lapeer on Dec. 15 was a close affair that didn’t get settled until the final session of play.

Last Friday’s rematch at Carman-Ainsworth followed a very similar pattern as the Cavaliers were only up 16-12 in the first quarter and 23-22 at the half. The Cavaliers then extended that lead to 37-31 at the end of the third on their way to winning 61-42.

“In the second half we definitely did a better job rebounding the ball and getting some put backs,” said Carman-Ainsworth coach Jay Witham. “In the first half we didn’t do a very good job rebounding. We had one series where (Lapeer) had three rebounds in a row. We had the size advantage, so we should’ve done a better job inside and we didn’t.”

The second half began with Carman-Ainsworth going on a six-point run that featured field goals from Terry Armstrong and Jaylen Bradley, who ended up with 18 points, three rebounds, one assist and one steal and four points and six boards, respectively. Lapeer’s Aaron Hutton and Eric McGeary were able to counter that attack by combining for four points, only to see Armstrong connect on a pair of free throws to make it a 31-26 lead for the Cavs with 4:00 left in the third. 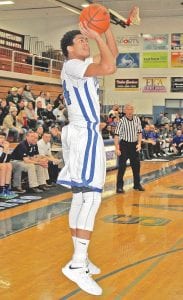 “Eric (McGeary) just competed as hard as anybody. All of our guys did,” Lapeer coach Chuck Mahoney said. “Eric came through. He sets himself up and had some nice buckets for us. He’s always our floor leader and just a great competitor.”

After another Armstrong field goal put Carman-Ainsworth in the driver’s seat 33-26 at 2:27, McGeary once again hit a 3-pointer to end up with 18 points and three assists that Hunter Bailey followed for Lapeer with a score of his own. The Lightning wouldn’t change the scoreboard for the rest of the quarter, though, instead giving up field goals to Michael Fletcher, who had seven points, five rebounds, one steal and a block, and Aaron Williams to head into the fourth down by six.

“(Fletcher) is still getting his feet wet. He was brilliant at times around the basket and he’s got nice post moves,” said Witham. “When he collects himself and settles down out there, he’s got some nice feet, and they’re only getting better. The other thing is he can also step out and shoot the ball.”

The final session of play was where the game slipped away for Lapeer. Carman-Ainsworth took leads of 50-37 at 3:50, 52-39 at 2:41 and 54-40 at 1:43. Despite the drop off, the Lightning still had several other solid performances as Bryan Morse put up seven points and three assists and Drew Rubick pulled down five points and nine rebounds. Combating these contributions for the Cavs were Ja’Kavien Lewis with 12 points, five steals, four rebounds and two assists and Chan Pearson scored nine.

“We’ve got to get better with our on-ball defense. Plus off the ball cutting the floor and rebounding the ball,” Witham said.

“I’m proud of my guys. We played hard. (Carman-Ainsworth) is obviously a very talented team,” said coach Chuck Mahoney. “I think stuff ends up going in your favor a little bit more when you have that level of talent and size. It’s a good sign that we can compete like we did against a team like that. We were able to compete for three quarters, but things just got away from us in the fourth.”

Carman-Ainsworth has a home conference game against Powers tomorrow.