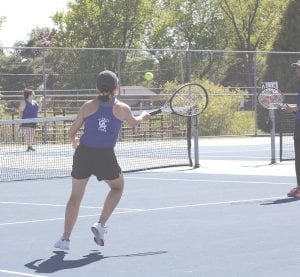 MIDLAND – Carman- Ainsworth has already seen many of the teams it will contend with in tomorrow’s regional, most recently at last Thursday’s Saginaw Valley League meet. No. 1 Div. 1-ranked Midland Dow won the meet. Host Heritage was second and Lapeer was fifth. Davison trailed Lapeer by half a point and Carman-Ainsworth trailed Lapeer by 1.5 points.

Teams have to win the regional, place second or earn 18 points to move on. The winner and runner up at No. 1 Singles earn automatic berths. Dow is expected to win the regional and favored to earn the necessary points are Grand Blanc and Saginaw Heritage. That doesn’t mean any of the other teams won’t surprise and come out as state qualifiers, the roads just a bumpy one full of loaded teams standing in the way.

Missing from the regional will be Lapeer’s No. 1 Singles player, Gabrielle Molson, along with Brianne Rice and Erin Sahr. Molson and Rice will be taking the AP Test and Sahr will be in New York on a school trip.

Carman’s top player, Katie Speaks, was beaten by Molson 10-6 this season, but with her out of the mix, she’ll be concentrating on what to do against Dow and Heritage, first and foremost.

The rest of the singles lineup includes Mary Dollinger at No. 2, Aniya Harmon at No. 3 and Rachel Kuczera at No. 4.

The doubles tandems could help earn key points toward the 18 needed to move on and include: Alyssa Thomas-Huma Ahmad at No. 1, Evangelina Dang-Daslynn Hamlett at No. 2, Marcella Ryan-Alaiha Reed at No. 3. Carman-Ainsworth does not have a fourth doubles pairing this season.

Carman-Ainsworth lost a close match against Lapeer 5-3 earlier this season and was shut out by Heritage 7-0. How it fares against the other schools remains to be seen.

The regional draw had not been released yet as we went to press Tuesday. As always, the draw can make all the difference in the world. Matched up against Dow or Heritage in the first round and the tournament could be a very short one. Pit the girls against some of the other schools and the Cavaliers could earn some of those valuable points.