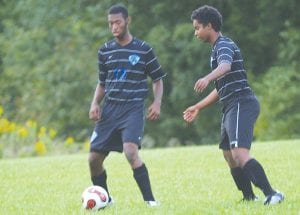 Ishman Sims (12) and the Cavaliers will take on Saginaw Heritage in their district opener.

FLINT —
Flint Carman-Ainsworth will have its work cut out as it could be a wide-open race in the No. 12-1 Flint Kearsley soccer district next week.

The Cavaliers got one of the toughest draws in the district as they will have to take on the Heritage Hawks in the top bracket of the eight-team field. The field is loaded with talented teams from all over the area, including teams from the Big Nine and Flint Metro League, among others. Davison, Flint Carman-Ainsworth and Flushing join the district fresh off of their Big Nine season, with a tough Raider team taking the title in the Big Nine. Add to the mix teams from Grand Blanc, Saginaw Heritage and the Flint Metro additions of Kearsley, Brandon and Swartz Creek and you have a who’s who of soccer teams in the area.

Grand Blanc, honorable mention in Div. 1 at the state level and 13-1-3 overall could be the favorite in the district, but don’t count out a solid Saginaw Heritage squad or even tough defensive teams like Davison or Carman-Ainsworth. This could be one of the more interesting districts in the area as there are three to five teams that have a legitimate chance to take the crown.

Expect the Bobcats to likely take care of Flushing, and Brandon and Davison meeting in the second round taking place on Wednesday.

Carman-Ainsworth and Heritage could be the toss-up game with the winner taking on the Bobcats in round two. It could be Grand Blanc against Davison for the final that will take place at Flint Kearsley high school on Saturday, Oct. 23, at noon.

The Cavaliers were mercied by Troy Athens, 8-0, last Thursday. Carman- Ainsworth did not have a shot on goal in the match. Tuesday’s game against Davison was called for lightning.