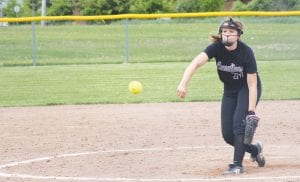 Carman-Ainsworth’s Madison Cox releases the final pitch in the 16-1 mercy-ruled loss to Lapeer on Monday at Lapeer.

SWARTZ CREEK – Carman Ainsworth’s softball team is in the middle of one of the toughest area brackets in the districts as they open up next Saturday against Swartz Creek, 17-17 overall, 7-7 Metro League. Should Carman-Ainsworth advance, it will await the winner of Div. 1 honorable mention Kearsley, 9-5 Metro, and Flushing, 3-11 Metro, in the district championship game.

In the outfield, Kristin Hawk, Morgan Sherrer, Cheyenne Pearson and Brianna Scales have been solid throughout the season. — B.P.