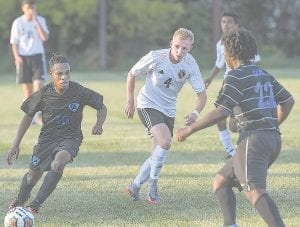 Carman-Ainsworth’s Alex Williams looks to move up the field against Corunna on Aug. 24.

FLINT TWP. — The Carman-Ainsworth boys’ soccer team notched a win Monday night after defeating Bay City Central 3-0. The score was 0-0 until the second half when Carman-Ainsworth finally picked up the pace to find the net three times.

Eli Young found the back of the net first with a helper from Keenan Shukairy. Zain Shukairy then rippled the mesh twice, with assists from Ryan Farrar and Keenan Shukairy. Keeper Dar Bostwick had three saves in net.

Last Wednesday, Carman- Ainsworth was shut out at Midland 5-0. The Chemics held a 3-0 lead at halftime. Midland added the final goals in the second half to seal the win.