Cavaliers shut out by Kearsley in soccer 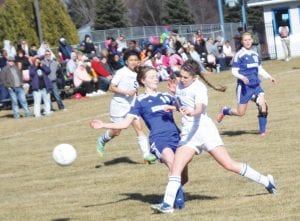 FLINT TWP. — Kearsley bounced back from a season-opening loss to defeat Carman-Ainsworth 8-0 Monday. Kearsley led 6-0 at the break.

Sydney Owens opened the scoring just four minutes in on an assist by Lauren Dellaposta. Alexis Allen made it 2-0 on a penalty kick after a Cavalier defender was called for a hand ball.

After another goal by Allen on an assist by Megan Livingston, Kugar Nettel scored on a penalty kick at 21 minutes. Lexi Kelly and Dellaposta added the final two goals of the half to put the Hornets in front by six.

Kelly scored her second of the match from Marysa Gatica at the 15-minute mark to make it 7-0. A goal by Dellaposta closed out the scoring.

“When the mercy rule comes into play I always look to our girls to be respectful and not over celebrate, but it was me who was cheering the last goal because it’s everything we aspire to be as a soccer team – passing on the ground and a fine finish,” Kearsley coach Marshall Paterson said. “It’s only our second game of the season, but our energy and work rate were much better tonight.”

The Hornets dropped their season opener to Birch Run 1-0. The goal came with just two minutes left in regulation play.

“It’s a heartbreaker to lose so late in the game, especially after having the bulk of the play,” Paterson said. “Credit the Panthers because they were resolute right to the last minute and we didn’t take advantage of the chances we created.” — K.W.