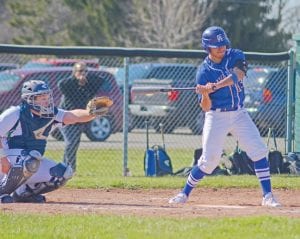 Senior catcher/pitcher Cooper Betancourt waits for the pitch for Carman-Ainsworth.

FLUSHING – Carman- Ainsworth had every reason to feel confident heading into its first round Div. 1 varsity baseball matchup against Flint Metro League and Genesee County rival Swartz Creek on Tuesday.

That’s why it wasn’t surprising to find these teams in a scoreless deadlock heading into the fifth inning. What wasn’t expected was Swartz Creek driving in four runs in the fifth and another six runs in the sixth to mercy the Cavaliers 10-0 in six innings.

“Swartz Creek had some timely walks and a two-out single that drove in two runs to break the tie. They were able to put two more in the inning to make it 4-0 after five,” said Carman-Ainsworth coach Steve Faculak. “This knocked (starting pitcher Austin) Jerome out of the game and subsequent pitching walked across two more in the sixth and two straight doubles brought the game to 10 to 0.”

Carman-Ainsworth was held to just two hits for the game while allowing nine. Matt Durbin and Jawanza Edwards each went 1-for-3. Creek was led by Justin Bauserman, who went 2-for-3 with four RBI and a run.

The Dragons play Kearsley in the semifinals on Saturday at 10 a.m. followed by the host Raiders facing Saginaw Heritage at 11:30 a.m. The championship will then be decided at 1 p.m.