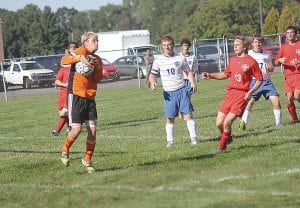 FENTON — Carman-Ainsworth dropped a 3-0 decision to Fenton on Aug. 28 in a non-league soccer game at Fenton.

Andrew Ramirez was busy in goal with 11 saves for the Cavaliers. Carman- Ainsworth put four shots on the Fenton goal, but was stonewalled by Tigers’ goalkeeper Tim Geid.

The game was scoreless until the 17:35 mark of the first half, when Fenton’s Aaron Ferguson scored on a shot in the box off an assist by Logan Palmer. The Tigers took that 1-0 lead into halftime.

A penalty kick gave Fenton its second goal, when Matthew Wing converted with 34:15 left in the second half. The Tigers completed their scoring at the 17:25 mark, when Andrew Mowery scored from 18 yards out on a pass from Ferguson.

Carman-Ainsworth took a 1-4 record into Wednesday’s Saginaw Valley League opener at Midland. The Cavs will host Lapeer West in a non-league game at 4:30 p.m. today.