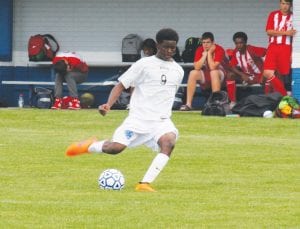 Senior Derrald Boggan puts his foot to the ball for the Cavs during a recent home game.

LAPEER — After their recent varsity soccer match ups against Genesee County rivals Kearsley and Flushing were postponed because of weather, Carman- Ainsworth was more then ready for its Saginaw Valley League game at Lapeer on Monday. The Lightning proved to be just as prepared, though, making Eric McGeary’s goal in the final two minutes of regulation the deciding factor in the Cavs 1-0 loss.

“We got beat on the outside from the start of the game, putting us on our heels. We were unable to clear the ball, allowing them to score,” said Carman-Ainsworth coach Jay Witham. “We played our best game of the year. We did a great job pulling the offside trap lead by Derrald Boggan, Lucus Schoffer and Jawanza Edwards.”

“Hats off to Lapeer’s midfielders, Jacob Schram and McGeary, who did a great job controlling the play,” Witham said.

Kieren Smith scored twice for Owosso on Thursday to open a non-conference game that Carman-Ainsworth wound up losing 3-1. Connecting for the Cavs was Quinton Pincomb on the Ryan Macko assist in the second half, making six saves was netminder Ray Macko and Traverse Campbell had Owosso’s other goal at the end of the first.

Carman-Ainsworth was at Flint Northwestern for a SVL game yesterday.