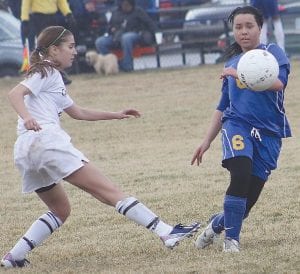 Carman-Ainsworth’s Melody Bamford (left) battled against Kearsley during the regular season on April 8.

FLINT TOWNSHIP — The Davison soccer team fell to Grand Blanc in the opening round of districts last year and the Lady Cardinals were hoping to exact some revenge this year. However, both teams needed to reach the district final.

In the semifinals, Davison cruised to a 4-1 victory over host Carman-Ainsworth last Thursday. The Lady Cardinals socred two goals in the first half and two in the second. The Cavs scored their goal in the first half off the boot of Shelby Marsh.

Ashley Haines made one save in net to earn the victory. Alyssa Burke led the offense with two goals, while Abigail Radcliffe and Payton Steinhaus each had one goal. Morgan Tallman added one assist.

Grand Blanc advanced to the district final with a 2-0 victory over Clarkston. That setup the rematch Davison was hoping for on Saturday. In the end, Grand Blanc proved too tough and came away with the district title, 3-1.

The Bobcats scored two first half goals one added one in the second while Davison had one in the first half. Kelly Hazel scored for Davison with an assist going to Burke. Grand Blanc was led by Allie Winterfield with two goals and Annie Walker with one.

Grand Blanc advanced to the Saginaw Heritage regional on Tuesday.