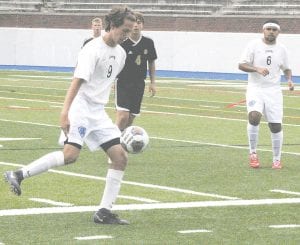 Key players for the Cavaliers this season include senior Wallace Hill at forward, senior Mohamed Farhan at defender, senior Adonis Encarnacion and junior Keenan Shukairy at midfield and sophomore Darwin Bostwick in net.

Last year’s squad was 4-7 in the Saginaw Valley League last season and 7-13 overall.

Head coach Jay Witham, who is in his 12th year coaching, noted that the team is more experienced this year with added depth, but their biggest challenge will be finishing each game and the pace of play.

“The Saginaw Valley League will be tough with the addition of Grand Blanc this year,” said Witham. “We were also a very young team last year with only three seniors. Many of the young players saw a lot of varsity experience, which should help us this year.”

Grand Blanc joined the SVL this season after being voted out of the Kensington Lakes Activities Association.

Carman-Ainsworth is already off to a hot start this season, going 4-0 in the first two weeks of play. — K.R.