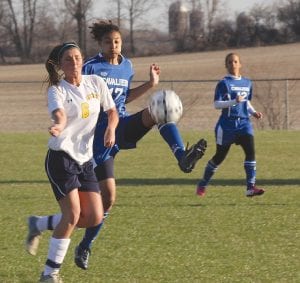 At this point in a very soggy season, teams are employing the any-dry-field advantage just to get the games in.

Monday against Flushing, Carman- Ainsworth was shut out, 3-0.

After another week of rain/cold delays, Carman-Ainsworth invited Flint Northern to its place last Thursday after Northern’s field was still partially under water on Thursday. The game ended in a 13-0 mercy-ruled win for the host Cavaliers with just one-half needed.

“At this point, whoever has the better field, we are playing, wherever,” said Carman-Ainsworth coach Jessyca Matthews.

Alexis Thurber got the scoring started on an assist from Shelby Marsh, then Diamond Bailey scored assisted by Morgan Overton. A string of unassisted goals ensued with Holley Taylor, Marsh, Sondra Rawls and Jordan Marsh burning the net. Hope Woodruff then toed in a goal assisted by Tiffany Crouteau, Overton slipped in an unassisted shot and Kelle Dyke found the back of the net. Rachel Roop took a pass from Melody Bramford and booted it in, Maggie McCann scored unassisted and Selena Johnson then took a pass from Bamford. Bamford answered with a solo goal to end the game.

In goal for Carman-Ainsworth, Johnson and Woodruff were not tested and had to make zero saves.