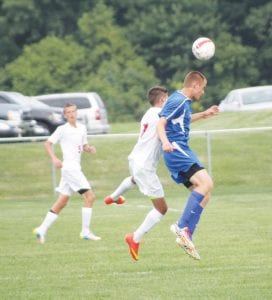 Ray Macko goes up and puts his head on the ball for the Cavaliers’ varsity soccer squad.

FLINT TWP. — After getting edged out at Lapeer 1-0 on Sept. 12 in a contest that was rescheduled from the day before because of weather, the Carman-Ainsworth varsity soccer team was looking for much better results at the Cavalier Classic last Saturday. The Cavaliers didn’t disappoint, either, defeating Mt. Morris 6-0 to win their opening game for the event.

Scoring twice was Kyce Zaiter and adding a goal each included Yahya Abdelahy, Tyler Springer, Leon Bell and Charles Cantrell. Brandon then downed Clio 2-0 before Clio ousted Mt. Morris 3-0 to set up a championship matchup featuring Carman-Ainsworth against the Blackhawks, which the Cavs won 3-1.

The difference was Brandon scoring on its own goal in addition to net benders by Ahmad Alzahabi and Quinton Pincomb. Goalie Blake Crawford had five saves.

At Powers on Monday, Carman-Ainsworth got shut out 2-0 in a Saginaw Valley League-South game on a pair of first-half goals by the Chargers’ Will Haren. With the second of those scores coming on a penalty kick, Tyler Springer made nine saves and netminder Ray Macko had three defensive stops.

In a non-conference contest last Friday, the Cavs tied with Owosso 2-2. Leon Bell scored first for Carman-Ainsworth on the Ahmad Alzahabi assist and Quinton Pincomb connected on the final goal of the contest unassisted.

In a Saginaw Valley League-South shootout at home against Flint Northwestern on Sept. 17, the Cavaliers got two goals from Charles Cantrell on their way to winning 9-0. Wisdom Pittman was next on the stat chart with a goal and an assist, scoring once each were Tyler Springer, Derrald Boggan, Leon Bell, Jason Hayes, Brandon Moore and Quinton Pincomb and adding two assists apiece were Isaac Young and Uthman Shukairy.

Yahya Abdelhay had an assist and Ray Macko earned the win in goal for Carman-Ainsworth. The Cavs hosted Flint Southwestern yesterday in conference competition.