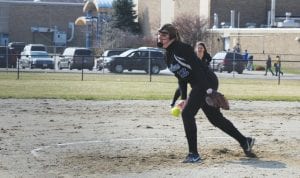 CLIO — Carman-Ainsworth dropped a non-league softball doubleheader to Clio on Tuesday, 8-5 and 13-2, at Clio.

The Cavaliers got two hits from Alexis Richie, and Jessica McClung struck out five Mustang batters in her pitching performance.

On April 30, the Cavs dropped a pair of close games to Saginaw Heritage, 6-2 and 4-3, in a Saginaw Valley League crossover doubleheader at Heritage. Carman-Ainsworth had a combined 10 hits in the twinbill and was in the first game until Heritage scored six runs in the fifth inning. The Cavs also rallied in the seventh inning of the nightcap to slice a 4-2 deficit to 4-3 but couldn’t score again.

Carman-Ainsworth will return to SVL-South Division play today with a doubleheader at Flint Powers Catholic.