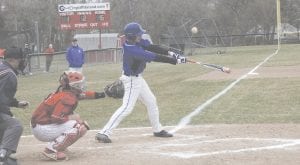 Carman-Ainsworth’s Ezekiel Ochodnicky makes a connection during a game against Swartz Creek on April 10. Photo by Brandon Pope

GRAND BLANC – The Carman- Ainsworth baseball team split a twin bill with Grand Blanc on Monday. Grand Blanc took a 12-5 win in the early game but the Cavaliers bounced back to win the night cap, 3-0.

Grand Blanc held a 3-2 lead after two innings in the early game before driving in eight runs in the third. Carman- Ainsworth added three in the fifth and Grand Blanc added an insurance run in the sixth.

In the late game, the Cavaliers scored two in the fourth and one in the seventh while outhitting Grand Blanc 9-1. Logan Brassaw took the mound for six innings, retiring 10 while giving up a hit and four walks. Garrett Gleason and Jacob Durbin combined in the final inning, striking out one and walking two.

Koegel had another three hits, an RBI and a run. Sean Jerome added a pair of hits and a run.

Last Thursday, Carman-Ainsworth dropped a pair of games against Lapeer, losing the first 10-6 and the second 7-1.

The first game was knotted up at 1-1 until the fourth inning when Lapeer grabbed a 3-1 lead. The Lightning then added three in the sixth, but Carman- Ainsworth responded with a pair of runs of its own. Lapeer’s lead continued to grow in the seventh though with another four runs. Carman-Ainsworth added another two.

Hogan toed the rubber for 5-2/3 innings, striking out six and giving up eight hits, six runs and three walks. Hogan also led the offense with two hits, an RBI and a run. Alex Green had a hit and three runs.

In the late game, Lapeer scored four in the second, one in the third, one in the fourth and one in the fifth. Carman- Ainsworth’s lone run came in the sixth. Gleason struck out five and gave up four hits, seven runs and six walks over 4-2/4 innings. Hogan and Jerome had a pair of hits each.

Green, Gleason and Brassaw all had a hit and an RBI each. Koegel chipped in a hit and a run.