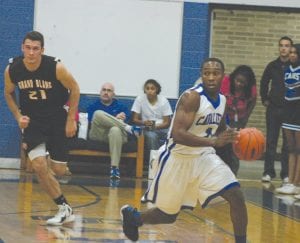 Carman-Ainsworth’s Denzel Watts brings the ball up the court against Grand Blanc.

FLINT TOWNSHIP — The Carman-Ainsworth boys’ basketball team started the season with a loss to Grand Blanc, but has reeled off three straight victories including Tuesday’s, 76-60, victory over Flint Northwestern.

The Cavaliers jumped out to a commanding 26-10, lead after the first quarter. The Wildcats tried to battle back and outscored the Cavs, 20-17, in the second to trail, 43-30, at the half.

Carman-Ainsworth came back strong in the third quarter and edged the Wildcats, 16-13, and the two teams each scored 17 points in the fourth, as Carman-Ainsworth earned the victory.

Last Friday, the Cavaliers traveled to Flushing and cruised to a 64-42 victory over the Raiders. Carman- Ainsworth jumped out to an early lead and led, 31-19, at halftime.

Leading the way for the Cavs was Morse with a career-high 24 points. Green had 14 points and Watts came through with eight points, five steals, five assists and four rebounds.

The Cavaliers shot the ball incredibly well on Friday including 62 percent overall and 41 percent from three-point range.

“Gerald Holmes had eight rebounds, which was big, Cam had a great shooting night, Denzel played one of his best all-around games and Justice Green gave us a spark off the bench,” Carman-Ainsworth coach Bob Root said.

The Cavs, 3-1 overall, travel to Flint Powers on Friday and have a rematch at Grand Blanc on Jan. 2.