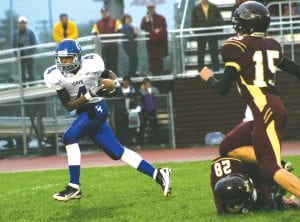 DAVISON — It looks like Big Nine Conference football teams will be chasing Carman-Ainsworth the rest of this season.

Barron had another 100-yard rushing game and accounted for all four touchdowns last Friday, as the Cavaliers beat Davison, 28-7, at Cardinal Stadium to complete the first round of league play at 3-0. Carman leads Flint Powers Catholic by one game, but must play all three league opponents again over the next three weeks.

“We just have to get ready for the next game and try to get better each week,” said Cavs coach Nate Williams.

Barron rushed for 103 yards and three touchdowns on 13 carries to give him 444 yards and eight touchdowns in Big Nine play. He also threw a 47-yard touchdown pass to Brandon Walker and intercepted a pass on defense.

“That kid is special,” said Williams. “You have to respect him and try to contain him, but it’s not as easy as people think.

“The thing is, it doesn’t all have to be on his shoulders. He carried only 13 times. That’s where we’re dangerous, when teams also have to respect Lorenzo Redmond and the receivers. That’s my goal, for the other teams to have to defend the whole field.”

Redmond added 81 yards on 20 rushes before leaving late in the third quarter with an ankle injury.

The game started in a light rain, and Davison had trouble holding onto the ball. The Cardinals lost five fumbles and threw two interceptions, giving up the ball on four straight possessions in the first half, when Carman scored all its points.

Barron opened the scoring with a 37-yard touchdown run with 7:18 to go in the first quarter. Connor Storms added the first of his four extra points for a 7-0 lead.

With 1:41 left in the quarter, Barron found Walker behind the Davison secondary for a 47- yard touchdown strike and a 14-0 lead.

Early in the second quarter, Myles Overton recovered a Davison fumble at the Cardinals’ nine-yard line, and Barron converted into a oneyard touchdown run and a 21-0 lead with 6:28 left in the half.

The Cardinals fumbled again at their 30 and Barron scored from the two with 1:30 left for a 28-0 halftime lead.

Davison averted the shutout with 2:45 left in the game on a seven-yard touchdown run by Julian Molina.