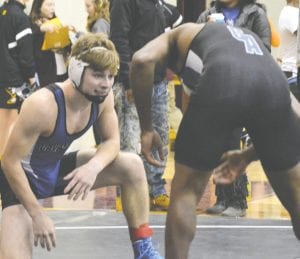 — The Carman-Ainsworth wrestling team competed in the Div. 1 individual districts at Bay City Western on Saturday, but no Cavaliers placed within the top four wrestlers in their respective weight classes to earn a spot in the regional championships.

No Carman-Ainsworth wrestlers advanced beyond the semifinals of the consolation bracket. Jordan Edwards at 171, Dominique Horton at 160, Nathan Delong at 152 and Jacob Yost at 135 all lost in the quarterfinals before eventually losing in the consolation semis.

Edwards lost a 4-2 decision in the consolation semis to Flushing’s Devin Powells, who went on to place third overall. Prior, Edwards pinned Swartz Creek’s Travis Truett at 1:34 in the first consolation round but was pinned by eventual champion Cal Stefanko at 2:49 in the quarterfinals. Edwards started his day by winning an 11-9 decision over Traverse City Central’s Cam Case in the first round.

Horton was pinned by Traverse City West’s Jaxon Labreck at 1:06 in the consolation semis. Horton previously pinned TC Central’s Dakota Perry 5:42 in the first consolation round. He was originally knocked out of the winner’s bracket by pin by Lapeer’s Griffin Boustead at :40 in the quarterfinals after Horton won an 8-1 decision over Bay City Western’s Jacob Walter in the first round.

Yost was pinned by eventual third-place finisher, Swartz Creek’s Joe Carpenter, at 5:41 of the consolation semifinals. Yost won his first consolation match on a technical fall over Midland’s Hunter Carey-Spea. Yost was knocked out of the winner’s bracket in the quarterfinals by pin at 4:22 by Grand Blanc’s Griffin Redmond after receiving a bye in the opening round.

The loss in the district semifinals concluded the team season for Carman-Ainsworth last Wednesday..