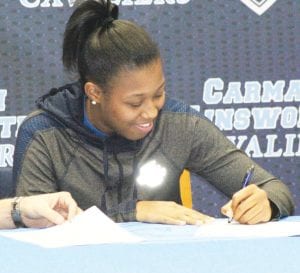 FLINT — The Carman-Ainsworth girls’ basketball program has been one of the tops in the area in recent years, and during a ceremony at the high school on Wednesday, that legacy continued. The Lady Cavs’ saw Destiny Strother make her college commitment, selecting Marquette.

“It fits me,” said Strother. “When I’m there it feels like home. The people there are nice and very helpful on and off campus. They make me feel very welcomed and I had the feeling in my heart that it was right for me.”

Strother definitely had her options, having taken visits to Toledo, Western Michigan, Oakland, Central Michigan and Michigan State among others. She’s also got her options as to what academic path she’ll pursue.

“I’m still debating business or sports medicine,” added Strother. “I always wanted to start my own business and I plan on doing it, but then again, after my basketball career I still want to do something related to it. If it’s a coach or even a physical therapist for NBA players.”

College obviously has its challenges, but Strother is ready for what’s ahead of her.

“Being almost six hours away from my mom and just not seeing my siblings everyday (will be difficult), but I’ll be alright,” Strother continued. “I’m not really nervous, but I’m excited just to go and experience something new. Also, to play basketball with my new teammates.”

Strother also showed a lot of admiration and appreciation to those who helped guide her toward this goal, both on and off the hardwood.

“I just want to thank all my coaches, from Flint and Detroit, and my teammates for pushing me, always making me go harder then what I do and for keeping my head on track always,” Strother said. “And a special thank you to my mom for supporting me through everything.”

Although the opportunity is incredible, it’s not always easy having to leave behind those you care about most.

“I’m a little sad about leaving because I’m going to miss my family and friends,” concluded Strother. “It feels a little weird because I’m leaving my best friend Aaliyah McQueen because we have been playing basketball together since third grade. It’s a chance we could play college ball together, too – that would be great.”