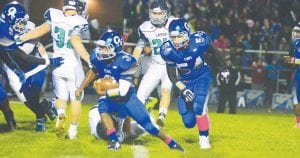 Carman-Ainsworth’s Caleb Ruffin rambles for some of his 342 rushing yards in last Friday’s game against Lapeer.

FLINT TWP. – Carman-Ainsworth had the game and a co-championship firmly in its grasp and let it slip away.

The Cavaliers saw a two-touchdown lead dissolve in the last four minutes of regulation and lost in overtime 34-31 to Lapeer in a Saginaw Valley League-Red football showdown last Friday at Carman-Ainsworth Junior High. Instead of a co-championship at 5-1, the fifth-ranked Lightning, 8-0, clinched the league title at 6-0, while Carman-Ainsworth, 6-2, tied for second at 4-2.

Caleb Ruffin rushed for 342 yards and four touchdowns on 33 carries and gave the Cavs a 28-14 lead early in the fourth quarter. It was still 28-14 with less than four minutes to play when Lapeer scored on an 80-yard touchdown pass to pull within 28-21.

Playing into a stiff wind, Carman- Ainsworth elected to go for it on fourth-and-3 from its own 29 with 2:17 left. Lapeer held and reached the 1-yard line on a 24-yard pass, then scored the tying touchdown with 1:20 left. 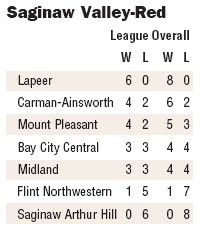 The Cavs got the ball first in overtime and kicked a field goal from the 7-yard line on fourth down. Lapeer then netted 5 yards on two runs before Brant Beck scored from the 4-yard line on third down to end the game and spoil Carman- Ainsworth’s homecoming.

The Cavs had led nearly the whole game until then, starting with Ruffin’s 70-yard touchdown run in the first quarter. He scored again from the 16 in the second quarter, and Ahmad Alzahabi’s second extra-point kick made it 14-0. Lapeer answered with a 4-yard touchdown run to pull within 14-7 at halftime.

Ruffin was at it again in the third quarter, scoring on a 51-yard run for a 21-7 Carman-Ainsworth lead going into the fourth. The Lightning cut it to 21-14 on a 1-yard run midway through the fourth.

Tyler Minor added 75 yards on 21 carries as the Cavs rolled up 449 yards on offense, all on the ground. Lapeer countered through the air, hitting 12 of 20 passes for 238 yards and a touchdown. The Lightning added 203 yards rushing for a 441 total.

Lapeer slowed itself with three lost fumbles. Carman-Ainsworth had no turnovers but hurt itself with 11 penalties for 115 yards.