Cavaliers suffer defeat at the hands of Athens 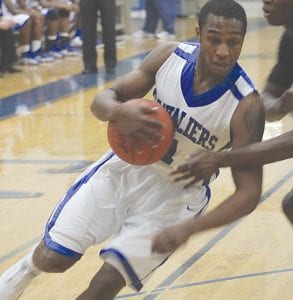 Carman-Ainsworth’s Denzel Watts leans hard as he drives to the bucket.

TROY — The Carman-Ainsworth boys’ basketball team has started slower than expected and lost its last game to Troy Athens last Friday, 80-69. The Cavs still have plenty of time to right the ship, but face a very competitive schedule the rest of the way.

Athens jumped out to an early lead and led, 20-16, after the first quarter. The teams went back and forth in the second quarter with Athens outscoring the Cavs, 14-13, to lead, 34-29, at the half.

The third quarter is where Carman- Ainsworth lost the game as it was outscored, 22-12. The Cavaliers did outscore Athens, 28-24, in the fourth but it was too little, too late.

Carman-Ainsworth coach Bob Root was not too pleased with the way his defense played in the game. “Terrible team defensive effort,” he said.

Denzel Watts did all he could, as he led the Cavs with 26 points and Cameron Morse added 22 in the defeat, but no other Cav had more than six points. The story for the Cavalier defense was Athens’ Marcarius Coakley who scored 38 points in the victory.

Carman-Ainsworth, 2-5 overall, begins Big Nine play tomorrow when it travels to Flushing to take on the Raiders.