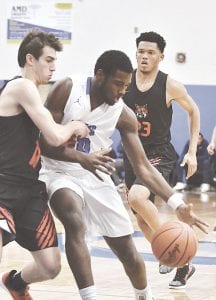 The Cavaliers led 53-41 heading into the fourth quarter, but Heritage finished the game on a 22-13 run.

Jayden Nunn scored nine of his teamhigh 20 points in the fourth quarter, including seven free throws on nine attempts, to close out the Hawks and secure the victory. Patrick Hollis and Mehki Ellison both added 12 points for the Cavs.