Cavaliers swept by No. 7 Oilers in baseball 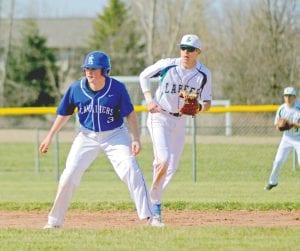 Carman-Ainsworth’s Garrett Gleason against Lapeer on April 12 at Lapeer.

FLINT TWP. – Carman-Ainsworth hosted the seventh-ranked baseball team in the state Monday and found the Mount Pleasant Oilers every bit as tough as advertised.

The Cavaliers managed just one hit in each game and lost the Saginaw Valley League doubleheader 7-1 and 15-0 in four innings.

Carman-Ainsworth had no hits in the first six innings of the opener against Logan Buczkowski, who has pitched 10 hitless innings this spring. The Cavs did get a hit and scored a run in the seventh against reliever Zach Colores.

Carman-Ainsworth had a hit and two walks in game two. Mount Pleasant had a grand slam in the second inning to make it 7-0.

Carman-Ainsworth split a doubleheader with Lapeer last Thursday at Lapeer. The Cavs lost the opener 10-2 but won the second game 3-2 by rallying for three runs in the seventh inning.