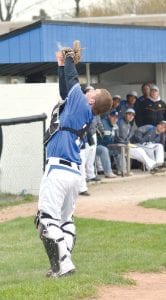 Carman-Ainsworth’s catcher Brett Dortch gets under a pop up.

FLINT — Amidst a week filled with on-field challenges of all shapes and sizes, the Carman-Ainsworth varsity baseball team played a non-conference game against crosstown rival Kearsley at Dow Diamond on Tuesday, losing, 13-5.

After falling behind the Falcons, 4-0, and, 6-1, at the end of the first and third innings, the Cavs were finally able to make it a 6-3 game heading into the sixth, only to end up getting outscored, 7-2, over the course of the game’s final six outs. Despite the otherwise gloomy background, Carman-Ainsworth still had several players who were able to shine, including Alex Thompson and Jake Weissend with two hits each.

In Carman-Ainsworth’s Big Nine opener on Monday, it fell to Flushing, 7-2, and, 2-1, in six innings. The story of that initial contest was the Raiders’ Kyle Randik, who threw a no-hitter with nine strikeouts and nine walks despite giving up a run on a wild pitch to the Cavs’ Jamal Dixon in the top of the sixth inning. The second game saw Collin Heaton take the loss for Carman- Ainsworth despite allowing no earned runs with six strikeouts in four innings of work.

Over the weekend, the Cavs competed at the Montrose Tournament, beating the host Rams, 5-2, before falling to Linden in game two, 14-0. In the first matchup for Carman-Ainsworth, Ethan Lambitz gave up six hits and struck out seven in five innings to get the win and Thompson had a key hit in the fifth inning that drove in a pair of runs. In the second contest, Chris Moran and Sheridan Cox managed a hit each for the Cavs.

Last Thursday, Carman-Ainsworth traveled to Lake Fenton for a pair of nonconference contests that they wound up winning, 6-2, and, 11-8. In the opener, it was Brennen Gleason who allowed six hits and two runs with two strikeouts for the Cavs in five innings to get the decision before Alex Thompson threw two scoreless innings with three strikeouts to earn the save. On the other side of the equation the Cavs were led by Jamal Dixon with two doubles and Tim Rye laid down two hits, two runs and two RBI.

The second game wasn’t quite as tightly contested after Carman-Ainsworth jumped out to a 7-1 lead, only to see Lake Fenton strike back with seven runs on seven hits in the top of the fourth before the Cavs rebounded to seal the deal with five-more runs of there own. This time around, the offense was led by Dixon and Alex Thompson with two hits and two RBI each, Colin Heaton had three RBI and adding a pair of hits was Grant Roe.

“We have improved a lot from last year. We have proven (we can) put the ball in play and strikeout less. Also, our Fielding has been better with no errors in our first game and two (against the Blue Devils),” said coach Tim Miller. “Pitching has been good with less walks. We have 16 young men on the roster (that have) shown they can contribute. Our lineup is much deeper this year. We have a lot of guys who can hit the ball. Junior Jamaal Dixon has shown he can be feared in the four hole with six hits and four doubles this year in three games. We are a good team that can be great if we work hard at the little things. It has been fun to see the team show they can comeback we have been down in two games but shown ablity to fight back.”