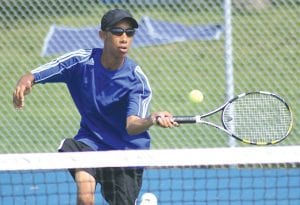 No. 2 Singles player Chris Crowder is one of 10 underclassmen in the Cavs’ lineup.

SAGINAW TWP. — Carman- Ainsworth’s tennis season likely will come to a close today, when the Cavaliers play in a tough Div. 1 regional at Saginaw Heritage.

Carman-Ainsworth is in a nine-team field that includes powerful Grand Blanc and three Saginaw Valley League teams that finished ahead of the Cavs in the conference tournament — Midland, Davison and host Heritage. The other schools in the regional are Grand Ledge, Holt, Traverse City Central and Traverse City West. Only the top two teams, plus any other team scoring 18 points, go to the state meet Oct. 19-20 at Midland Community Tennis Center. The No. 1 Singles champion and runner up also advance.

The Cavs were not expected to get any seeds in the regional, which seeds the top four players.

“It’s such a tough region for us, and my team is probably going to encounter one of the seeds in their first match,” said coach Bob Chunn. “In our region, you lose, you leave. There’s no back draw.

“My team continues to improve. They’ve made great progress through- out the year, and I’m happy with their performance. But, a lot of them are beginner tennis players or just come out during the season. It’s going to be tough to beat the seeds in this region.”

“The thing I like about this team is they have a great attitude,” said Chunn. “They go out there, do the best they can and fight for every point. They’re a hard-working group of people, they just need more experience playing tennis. I think most of them said they’d like to do something in the off-season this year. That’s going to make a big difference next year if they follow through on that commitment.”