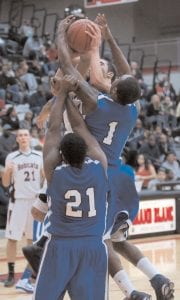 BRIDGEPORT — Carman-Ainsworth got back on the winning track Tuesday, beating No. 5-ranked Bridgeport, 67-38, to snap a twogame losing streak.

The Cavaliers had sailed through their first five games undefeated before losing to Grand Blanc on Jan. 4. That stumble became a twogame skid when they lost against Troy Athens last Friday, 66-58.

But the ship was righted Tuesday as Carman- Ainsworth jumped out to a 17-7 first-quarter lead at Bridgeport and stretched it to 37-16 at halftime. The Cavs held a commanding, 57-29 lead entering the fourth quarter and coasted to their sixth victory against two defeats.

Their 6-2 record has earned the Cavaliers some points in the season’s first Associated Press poll, where they are honorable mention in Class A. Bridgeport is No. 5 in the Detroit Free Press Class B rankings.

The Cavs couldn’t hold a lead against Troy Athens. Just as in their loss at Grand Blanc three days earlier, the Cavs started strong but succumbed to a second-half rally.

Carman-Ainsworth will finally open Big Nine Conference play Friday with a game at Flushing. The Cavs will visit Flint Powers Catholic next Friday, Jan. 21. Powers won the Class B state title two years ago and is ranked second in Class B.