Cavaliers to face some stiff competition at regionals 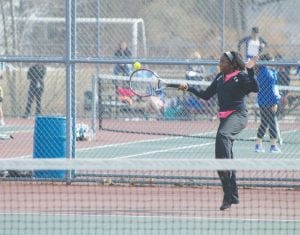 FLINT — The Carman-Ainsworth girls’ tennis team will be facing a host of talented teams at the upcoming Division 1 No. 8 regional at Saginaw Heritage today.

Both TC Central and Midland Dow are ranked in the Michigan High School Tennis Coaches Association top 10. Central is currently fifth in the standings while Dow is right behind in sixth.

A lack of action could also hamper the Cavaliers in their hopes of moving on. Carman-Ainsworth’s last two matches were canceled due to inclement weather conditions.

“We really haven’t had a chance to practice,” Chunn said. “We’ve either been playing matches or have been rained out.

“It’s been a miserable spring, but all the teams are in the same situation.”

The Cavaliers don’t have a seeded player entering regional play. All Carman-Ainsworth’s players will be facing a random draw to determine their competition.

That means that a number of Cavaliers may have to face No. 1 seeds in their first matches. And with those potential difficult draws, Chunn is realistic about his team’s chances.

“If they (the team) go out and do the best that they can I’m happy with that,” Chunn said. “We’re just going to go in with a positive attitude.”

Chunn also acknowledged that it is unusual for unseeded players to beat seeded players. So it will be an uphill climb for all of Carman-Ainsworth’s Singles and Doubles players to move on.

The good news is the Cavaliers have at least one player who could surprise some of her opponents. No. 1 Singles player J’Lynn Corder comes into the tournament with just one loss on the season.

That loss came last week at the Saginaw Valley League meet. But even though Corder lost in straight sets, the scores were just 4-6, 6-7.

She has the ability to make her opponent’s lives miserable. She just can regain the magic touch that enabled her to go into the league meet with an unblemished record.

The Cavaliers finished 2-2 in the conference and 5-2-1 overall. Still, bettering that mark will be a tall task indeed.