Cavaliers to tee it up in golf district 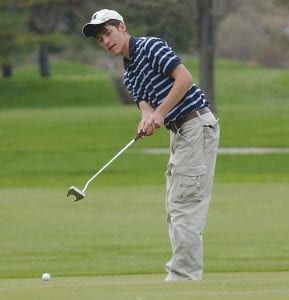 Senior Tony Mattar has a shot qualifying for regionals.

FLINT TWP. — Golf season will end for most of the Carman-Ainsworth boys’ team this week, but that doesn’t mean its trip to the district tournament will be a waste of time.

The Cavaliers will journey to Bay City Country Club on Friday for a Div. 1 district featuring powerhouses like Davison, Bay City Western and Traverse City Central and West. Realistically, Carman is a longshot to earn one of the six qualifying berths for next week’s regional at Flushing Valley Country Club.

But senior Tony Mattar has a good shot at moving on individually, and rest of the Cavs can take a lot from the experience.

“They’re all underclassmen, so hopefully this prepares them for next year and gets them excited about tournament play,” said Carman coach Bob Blaylock. “Maybe it will motivate them through the summer.”

Mattar came within two strokes of making the regionals last year, when he shot 84. He’s been averaging 40 for nine holes this year and shot 82 in a cold, rainy Big Nine tournament last week at the Davison Country Club. The top six individuals not on a qualifying team advance out of the district.

“He’s got a legitimate shot at making regionals,” said Blaylock. “Then that’s at Flushing Valley, and he’s played there a lot. So he’s got an outside shot at state.”

All the Cavs have shown improvement this spring, despite the record rains and cold weather that have kept them off the golf course. Cameron Simmington has shaved five strokes off his ninehole average since the start of the season, dropping to 47. He carded 42 on the front nine at Davison last week. Fellow juniors Kameron Rutlewski and Jacob Linder are in the mid-50s, and sophomore Jack Baker is near 60.

“They’ve all improved from the beginning of the year,” said Blaylock. “You just can’t expect a lot with this weather.”

The other teams in the district will be Alpena, Bay City Central, Flint Northern, Flushing, Midland, Midland Dow and Saginaw Heritage. Survivors move on to Flushing Valley on June 9.