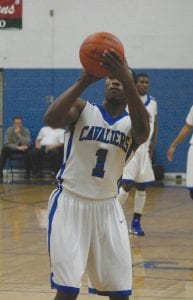 FLINT TOWNSHIP — Clarkston came to the ‘Gravel Pit’ on Tuesday and returned home with a 53-50 defeat at the hands of Carman-Ainsworth.

The matchup pitted two Class A heavyweights that was not decided until the final seconds. Clarkston hoisted a three-pointer as time expired, but it fell short and the Cavs held on for the victory.

Clarkston responded in the third quarter with a 16-12 edge to trail by just three points entering the fourth, but each team scored 10 points in the fourth.

On Friday, the Cavs traveled to Flint Northwestern to take on the Wildcats. Carman-Ainsworth jumped out to a commanding first-quarter lead, 25-11, but had to hold on for the 59-57 victory.

The Cavs extended their first quarter lead with a 16-10 edge in the second quarter to lead by 20 at the half. The Wildcats responded with a 16-5 advantage in the third quarter and outscored the Cavs, 20-13, in the fourth.