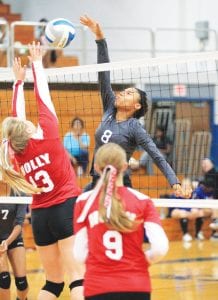 Carman-Ainsworth’s Eriona Chambers tips the ball back across the net as a Holly player tries to block her attempt.

FLINT — Carman-Ainsworth picked up a straight set victory over Flint Northwestern Tuesday 25-13, 25-15, 25-7. The victory raised Carman- Ainsworth’s overall record to 5-15-1 for the season.

“We have been working really hard to improve in some crucial areas of the game,” coach Barb Hurand said. “I was happy to see success in those areas.

“I am proud of the girls and we will continue to work hard to make sure we improve each time we play.” — K.W.