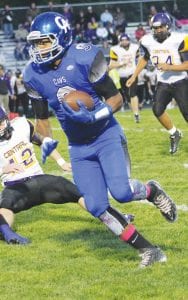 Jaylen Bradley heads down the left sideline on a 37-yard touchdown reception in last Friday’s 40-0 win at Carman-Ainsworth Middle School.

The Cavaliers took a 27-0 lead into the halftime homecoming activities and capped the rout with a 101-yard interception return for a touchdown by Cahlil Brownlee with 5:05 left in the game.

Isaac Gillum hit 8-of-12 passes for 151 yards and a touchdown filling in for injured quarterback Josh Jackson, and Jalen Lewis and Logan Banister scored two touchdowns each as Carman- Ainsworth improved to 3-2 in the SVLRed and kept its playoff hopes alive at 4-3.

The Cavs wasted no time, getting on the board just 1:41 into the game when Jaylen Bradley took a short pass from Gillum on fourth-and-5 and raced 37 yards down the left sideline for a 7-0 lead.

Justs 1:51 later, Lewis scored from the 8-yard line on a touchdown set up by Banister’s 40-yard pass reception from Gillum. 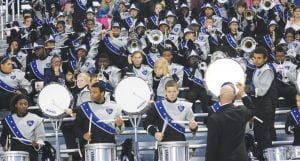 The Carman-Ainsworth band strikes up the school fight song after another Cavs’ touchdown in Friday’s game.

The Cavs were back at it early in the second half, as Lewis scored on an 11-yard run with 9:39 left in the third quarter to make it 34-0. Brownlee gave the homecoming crowd one last thrill by intercepting a Bay City pass a yard deep in the end zone and taking it all the way with 5:05 left in the game.

Meanwhile, the Cavs’ defense earned the shutout by stopping the Wolves at the 14, 24, 14 and 2 yard lines.