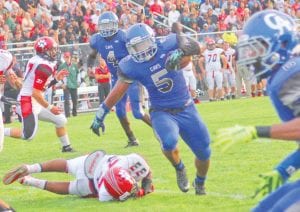 Jalen Lewis was an outstanding performer on both sides of the ball during the season.

The game will feature some of the top seniors from teams across the area.

Davison varsity head football coach Kyle Zimmerman in association with the Brandon Carr Foundation, was the driving force behind the first-ever All- Star game. The two teams participating will be called Team Rise and Team Pride.

Bradley and Brownlee were All- Saginaw Valley League First Team selections on defense. Lewis and Johnson made the Second Team All- SVL offensive squad.

Bradley had 10 tackles in a win over Davison. He also had seven tackles and a sack against a Midland squad that was ranked fifth in the state in Division 2 at the time.

Bradley also contributed on the offensive side of the ball. He had a 26-yard touchdown game in a win over Arthur Hill.

Brownlee was also a factor on both sides of the ball. He intercepted a pass and caught one of his own for a score in the season opener with Grand Blanc.

He also had another big game against Northwestern. He finished with seven catches for 42 yards for the contest.

Lewis was a major factor on the ground all season for Carman- Ainsworth. He opened the season with 79 yards rushing against the Bobcats.

Lewis also scored on an 80-yard run and had a total of 130 yards rushing against Davison. He had another strong game with 93 yards on the ground in the game with the Wildcats.

Johnson was one of the key reasons Lewis had so much success. He paved the way for Lewis on many of his runs this past season.