Cavaliers will look to finish strong 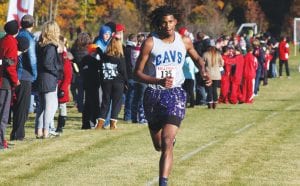 Juwan Willis is one of the runners who is capable of posting a good time for the Cavaliers.

FLINT — The Carman-Ainsworth girls’ and boys’ cross country teams closed out their season by finishing in third and fourth place at the Cavalier Invitational Friday.

It has been a trying season for the Cavaliers this year. Carman-Ainsworth’s kids are running hard, but they have yet to really have a good day heading into the regionals this weekend.

“We are weak from top to bottom,” boys’ coach Kenn Domerese said. “Hopefully we can beat at least one other team.”

Three other teams come into the field ranked in the state. Bay City Western is sixth, Davison is eighth and Saginaw Heritage is ninth. Grand Blanc has been to the state meet the last seven years.

The top three teams and the top 15 individuals qualify for the state finals.

Joe Chinkeefatt finished 15th at the invitational and could use that as momentum. Juwan Willis is another runner who has been at the top of Cavalier finishers all season.

The Cavalier girls haven’t fared a whole lot better. Khalia McGruder, who was 21st Saturday, is one of the girls’ top runners.

Bailey Curtis, Chante Boyd, Teaira Davis, Niajah Hood and Arianna Vantine round out the rest of the roster. — K.W.