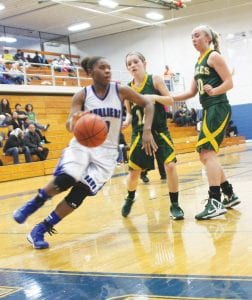 Randi Richardson drives the baseline in a December game against Lapeer East. The Lady Cavs will meet the Lady Eagles again in the district opener Monday at Lapeer West.

FLINT TWP. — The Carman-Ainsworth varsity boys’ basketball team came back from a 13-9 deficit at the end of the first quarter at home on Tuesday to claim a 76-38 nonleague victory over Owosso.

The difference in the contest was the Cavs outscoring Owosso, 22-8 in the second, 21-10 in the third and 24-7 in the fourth. Cameron Morse was the story in this one with a game-high 23 points, six rebounds, four assists and a steal, Justice Green and Simeon Kemp managed 10 points each with a combined six assists and three boards and Demarion Allen gave an eight-point performance.

In the race for Saginaw Valley League-South supremacy, Morse had 21 points, eight steals and four rebounds to help guide Carman-Ainsworth to a 61-56 victory over Davison at home last Thursday. Green wasn’t far off that pace with 19 points, four steals and three assists, Brennen Gleason and Ja’Quin Jones chipped in with five points a piece and scoring six with two rebounds was Jaylen Bradley.