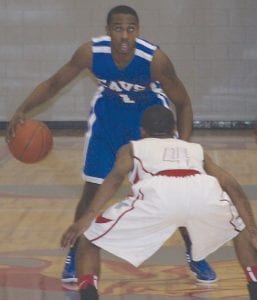 FLINT — The Cavaliers were coming off of an emotional win last Friday when they captured the last Big Nine title with a 58-55 victory over Davison to finish 6-0 in league play.

On Tuesday, the Cavs hosted Utica Eisenhower and struggled on offense en route to a 43-32 loss.

Eisenhower led, 11-9, after one quarter and stretched its lead to 18- 13 at the half. Carman-Ainsworth could not recover in the second half, as it was outscored, 9-8, in the third and 16-11 in the fourth.

Against Davison, the Cavaliers captured their 13th Big Nine title since Carman and Ainsworth combined 26 years ago.

The game looked as if it could be a blowout as the Cavs led, 9-7, after one quarter and stretched the lead to 26-12 at the half.

The third quarter saw Carman- Ainsworth outscore the Cardinals, 16-7, and entered the fourth quarter with a 42- 19 lead. The Cardinals offense exploded in the fourth quarter, as they outscored the Cavs, 36-16, but could not quite complete the comeback and tie the Cavs for the Big Nine title.

Carman-Ainsworth begins district play on Monday in District 10 at Flushing. The Cavs open the tournament with a game against Owosso, 9-10 overall, at 5:30 p.m. with the winner moving on to face Saginaw Arthur Hill, 15-5 overall, on Wednesday at 5:30 p.m.

Saginaw and Saginaw Arthur Hill should be considered the favorites as both have been ranked much of the season.

The Cavs, 12-7 overall, will conclude the regular season today against Ortonville-Brandon at home.