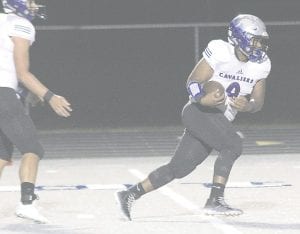 Tanayshio Dones of Carman-Ainsworth takes the hand-off during a game against Lapeer last season. Photo by Kylee Richardson

PORT HURON – The Carman- Ainsworth football team fell behind early, but fought its way back to a convincing 38-22 win at Port Huron last Thursday.

Port Huron struck first with a sixyard scamper that gave it a 7-0 lead following the successful extra point. That lead would hold until the second quarter, where Carman-Ainsworth took the lead with a seven-yard pass that led to a touchdown and a successful two-point conversion for an 8-7 lead. The Cavs weren’t done yet, however, as they added one more touchdown in the quarter on a run from one yard out. The extra point was missed, leaving the Cavaliers’ lead at 14-7 headed into halftime.

In the second half, Carman- Ainsworth’s Jakobe Blount scored on a 36-yard touchdown pass from Dustin Fletcher to give the Cavs a 20-7 lead after the missed extra point. Port Huron answered right back and added its second rushing touchdown of the game from four yards out to cut the Cavs’ lead to six points at 20-14. On the ensuing kickoff, Carman-Ainsworth extended its lead again after Chris Coleman ran the ball back 80-yards to the house for a 26-14 lead with one quarter to play.

In the final stanza, the Cavs scored again, this time on a four-yard scamper, to lead 32-14 following the failed twopoint conversion. Port Huron responded with its third rushing touchdown of the game and a successful two-point conversion to cut the deficit, but the Cavs struck back with a 45-yard touchdown pass brought in by Blount to secure the win.

Fletcher finished 13-for-20 with 236 yards and three touchdowns. Blount ended the game with four receptions for 94 yards and two touchdowns. Idris Bray led the team on the ground with 45 yards on six attempts while Armani Washington had 30 yards and a touchdown on eight carries.

Carman-Ainsworth (1-0) is at Midland (0-1) tonight at 5 p.m. The game will be played at Northwood University due to Midland’s field catching fire after lightning struck the press box, rendering it unusable for tonight’s game.