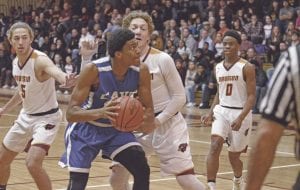 Michael Fletcher looks for a path to the basket against Davison’s defense Friday.

FLINT – Carman-Ainsworth jumped out to a 12-8 lead after one and went on to defeat Southwestern 65-39 Tuesday. The Cavaliers led 24-16 at the break.

Brandon Fuller and Chris Ballard had eight each for Southwestern.

The Cavaliers used a 20-9 run in the third quarter to take the lead for good in a 59-51 victory over Davison Friday.

Carman-Ainsworth trailed 28-21 at halftime but outscored the Cardinals 18-14 in the fourth to make the final margin eight points.