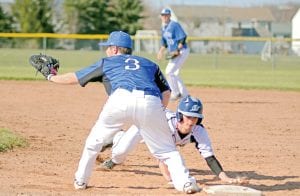 Carman-Ainsworth infielder Garrett Gleason tries to tag out a runner.

MIDLAND – After taking leads of 2-0 in the first inning and 6-1 in the third, the Carman-Ainsworth varsity baseball team scored five more runs in the fifth to beat Midland Dow 11-1 on Monday in the first game of a doubleheader. Going 2-for-4 with two runs and one RBI in the Saginaw Valley League crossover contest was Jawanza Edwards, Spencer Fiewig went 1-for-2 with two runs and one RBI and Isaac Gillum added a run and one RBI in two at-bats. The Cavs had eight hits and allowed nine.

The second game saw Carman-Ainsworth score a run in the first and then hold on before eventually falling 2-1. Coming in at 2-for-3 with one RBI was Garrett Gleason, Matt Durbin was 2-for-3 with a run and Austin Jerome went 1-for-3. While both teams had eight hits for the game, the difference was the two runs Dow posted in the fourth.

In the battle for Genesee County bragging rights, Carman-Ainsworth defeated Grand Blanc 2-0 on Friday. Even though the Cavs had just four hits for the contest and only allowed three, Justin King still went 1-for-2, Durbin and Gleason were 1-for-2 with a run and Edwards was 1-for-3. 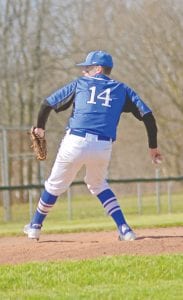 The Cavs then completed the sweep by getting the better of Grand Blanc in the second game 3-0. Posting two hits and a run in three at-bats were Edwards and Jerome, Gleason was 1-for-3 with a run and one RBI and Fiewig went 1-for- 3 with two RBI.

Carman-Ainsworth was at Linden yesterday and hosts Saginaw for a Saginaw Valley League crossover game today.