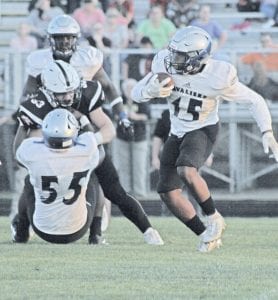 Carman-Ainsworth’s Charles Johnson looks up field during a run on Friday. Photo by Brandon Pope

Dennis Underwood opened the scoring for the Bobcats on a one-yard touchdown run at the 1:23 mark of the first quarter. Reed Fuller then ran the succeeding two-point conversion into the end zone, making it 8-0. The only other score before halftime was a seven yard touchdown pass from Grand Blanc quarterback Ty Brotebeck to Jack Baldridge, giving the Bobcats a 15-0 lead heading into the break after Dylan Hertzberg’s extra point.

Te’Avion Warren put the game out of reach, scoring the second half’s only points on an eight-yard touchdown run. Hertzberg’s ensuing extra point gave the game its final score.

Even with the lopsided score, the game was fairly even statistically, as Grand Blanc held a slight 318-257 advantage in total yardage. Carman- Ainsworth dominated time of possession 35:06-12:54.

Warren led all rushers with 96 yards and a score on nine carries, including a 57-yard run. Ishon Jackson ran for 50 yards on five carries, and Underwood rushed for 34 yards on eight touches.

Through the air, Brotebeck went 6-for-7 for 74 yards. Tylor Leedom went 2-for-7 with 53 yards. Montario Henry led all receivers with 77 yards on two catches. Jonah Meleski and Mark Miller both reeled in two passes for 16 yards.

Stats for Carman-Ainsworth were not made available.