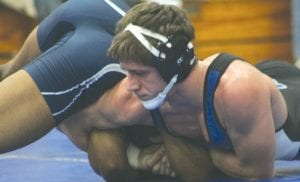 VIRGINIA BEACH, VA. — Four weeks after beating the best that Michigan had to offer, Jake Weissend mixed it up with the best wrestlers in the nation last weekend.

The Carman-Ainsworth senior traveled to the High School National Wrestling Championships, sponsored by the National High School Coaches Association, at the Virginia Beach Convention Center. The tournament brings together the nation’s top-ranked wrestlers in competition modeled after the NCAA Div. I Championships.

Commonly known as the Senior Nationals, the NHSCA event has seen hundreds of its participants go on to illustrious college careers. Every college wrestling coach in the country is invited to attend, and more than 200 were in attendance last year.

Weissend, who won the 145-pound state championship in the Div. 1 meet March 1-3 at The Palace of Auburn Hills to complete a 58-0 senior season, wrestled in that same class in the national tourney March 28-April 1.

Weissend opened with a 5-0 loss to Blake Letney of Iowa, but bounced back to beat Tyler Bemboom of Minnesota in a major decision, 12-0. He then beat Darren Stucker of Pennsylvania, 8-1, but was knocked out by a 6-1 loss to Lavion Mayes of Illinois. The top eight finishers in each weight class were afforded High School Senior All- American status and will be recognized at the National High School Sports Hall of Fame Museum.

Weissend ended his high school career with a 212-21 record that set the school win record.